Things to Do in the Isle of Whithorn

Background and History of the Isle of Whithorn

Located two miles from Burrowhead in South West Scotland is the Isle of Whithorn, one of the villages in the southernmost part of the Scottish Machars peninsula. For most of its history, it served as a key hub for trade, especially with essentials like coal, fertiliser, and timber being shipped in through the Isle. But most memorable perhaps is that the Isle of Whithorn was right at the heart of the beginning of Scotland’s Christian history 1,600 years ago. Ninian, who was Scotland’s first missionary and saint, founded the first Christian church in Whithorn and the Isle’s chapel was utilised as a stopping point for traveling pilgrims. The ruins of the chapel are still evident and can be explored at the end of the harbour.

Although the Isle is now not a true Island, there are maps by John Ainslie as late as 1821 showing the Isle as an island. Many many years ago, the main street was actually a causeway, with the Harbour located on what was then the true Isle. Gradually this strip of land was built upon, and buildings and houses clustered around a thriving shipbuilding business and trading hub.

At the end of the harbour, there is a white-painted tower or ‘Cairn’ which dates back in time to the Iron Age, when the extremity of the peninsula was a promontory fort. The Cairn which has since been a mariner’s landmark for almost two centuries stands at the top of the hill and boasts majestic views across the Solway Firth and the Irish Sea.

Looking to the east, the views include the broken coastline of Kirkcudbright and further in the distance the peaks of Cumbria’s Lake District. Whilst looking due south the Isle of Man stands clear, its nearest point just 18 miles away. Next to the cairn is a monument to the lost souls of the tragic Solway Harvester disaster of 2000. The Solway Harvester was a scallop dredger which suddenly sank without warning with all seven crew members being lost to the sea. Most crew members were local men and boys, many of who resided in the Isle and nearby villages.

The Isle harbour dries three hours on either side of high water, and there is a visitors’ berth at the outer end of the quay. Two slipways can also be found. One is at the inner end of the quay and is sheltered in all weathers, whilst the other, which gives access into the bay, can be used at virtually any tide time. The charming harbour is still regularly buzzing with local boats fishing for crabs and lobsters as well as leisure sailors visiting to moor or take on additional supplies. The Wigtown Bay Sailing Club welcomes all visiting yachtsmen. The clubhouse is situated in the harbour and has all the usual facilities.

In the summer months, many people enjoy swimming in the bay on the opposite side of the harbour which can be accessed by walking through the play area and heading away from the harbour.

At present, the Isle of Whithorn has been able to preserve its heritage, tranquillity and local community, allowing it to continuously attract both locals and tourists to this day. All in all the Isle is a very tranquil and relaxing place to explore.

Things to Do in and around the Isle of Whithorn

1. Stay at a Holiday Park 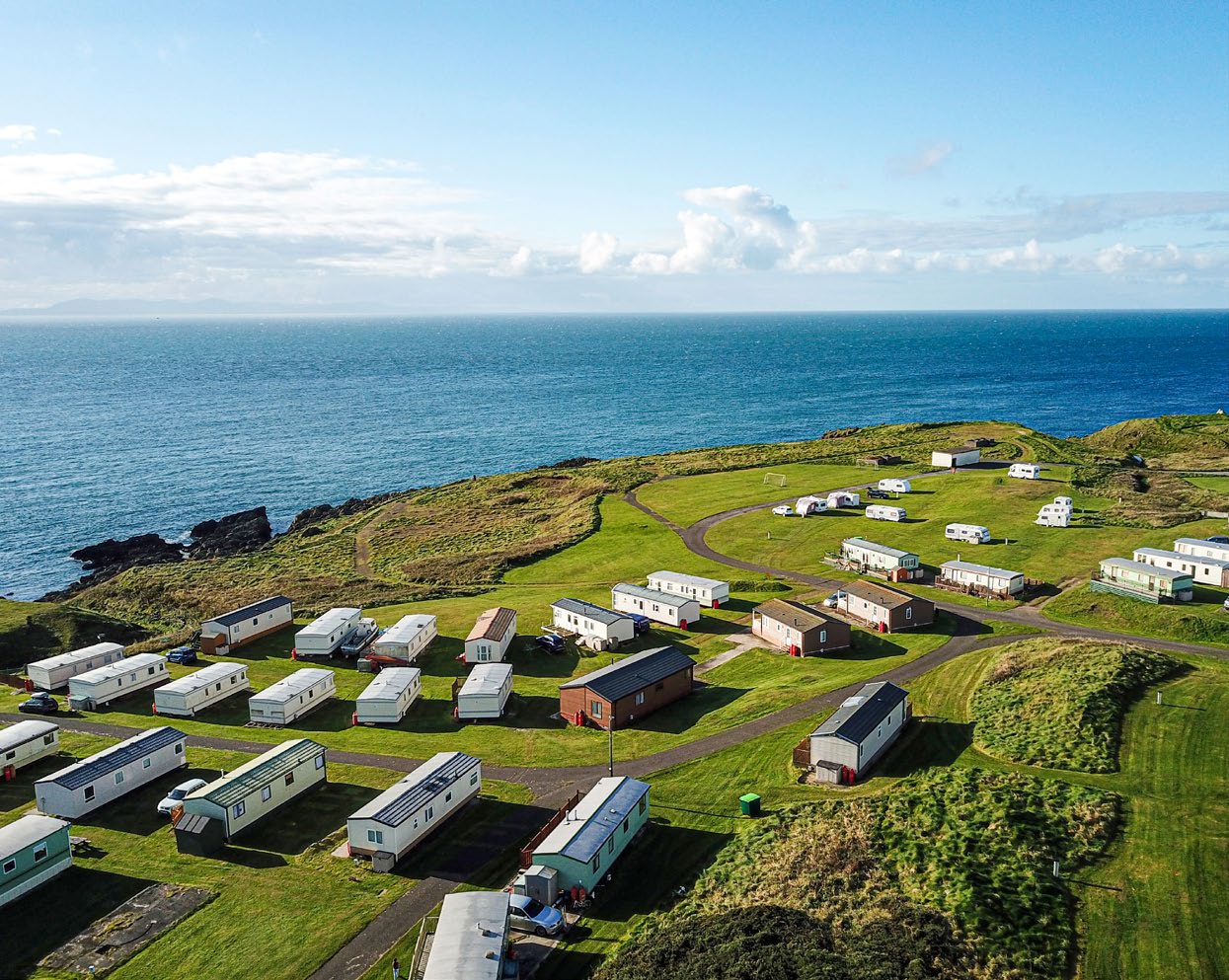 Staying at a holiday park like Burrowhead Holiday Village can make your trip to the Isle of Whithorn even more worthwhile. As the nearest caravan site to the harbour town, it allows you to explore the isle and keep a haven to retreat to after a long day. But the best part is that you’ll find various Burrowhead on-park facilities such as playgrounds, arcade machines, a jacuzzi, a pool and seasonal entertainment, among many other amenities that guests of all ages can enjoy.

If you’re looking for outdoor activities near Burrowhead, St Ninian’s Cave is worth adding to your itinerary. This small sea cave located four miles from Whithorn Abbey and just 3 miles along the coastal path from Burrowhead is believed to be the secluded spot that St Ninian, Scotland’s first saint, used as a place of solitude and retreat.

At present, the cave is only around seven metres deep and three metres high. However, it’s possible that it was originally larger and has only been blocked up because of rockfalls over time.

Many Christian symbols like crosses and carved headstones from the 10th and 11th centuries were discovered underneath its collapsed roof. Some are displayed in the Priory Museum, while many more are still found in and outside the cave. Rock towers can be seen along the shore built by visitors. Why not add your own?

The Isle of Whithorn also offers destinations for tourists particularly interested in religion and history, like the Cruggleton Church. The church was built by Fergus, the 1st Lord of Galloway, between 1125-1150 by Fergus to serve as his private chapel. Today, it is regarded as the most complete Romanesque church in Galloway.

What makes Cruggleton Church more striking is that its ruins sit quietly in the middle of a farm. And while the church is usually closed, its key is kept at a nearby farmhouse and it is still used to hold an ecumenical service once a year.

If you, your kids or your furry friends are looking for beaches near Burrowhead Holiday Village, then you’re in for a treat. Rigg Bay offers an excellent spot for swimming as well as calming strolls along the coast.

Its waters are warm thanks to the rising tide coming in slowly over the sand, allowing for a comfortable dip. On top of that, this sandy beach is remarkably always peaceful and quiet, allowing you to enjoy the beach and its nearby gardens in tranquillity, no matter the weather or time of the year.  Rigg bay is situated at Garlieston just 9 miles from Burrowhead along the picturesque coastal road.

5. Sightsee at the Galloway House Gardens

A couple of minutes’ walk away from Rigg bay is the Galloway House Gardens. One of the fascinating parks and gardens near Burrowhead Holiday Village, this attraction is set across more than 50 acres of parkland and complements the beauty of its surrounding natural landscape.

Here, you and your group can enjoy being surrounded by a wide variety of interesting flora, from wildflowers and old trees to exotic species that thrive in the region’s mild climate. But if you want to see the Galloway House Gardens in all its glory, visiting the attraction from March to June lets you see the garden bursting into life with every plant in bloom.

After a day of touring around, why not stop for refreshments. St. Ninian’s Tearoom is the place to be if you’re looking for a spot where you can enjoy a delicious breakfast, lunch or afternoon tea.

Of course, there’s also the Steam Packet Inn, a family-owned village pub serving a wide selection of local produce, locally brewed drinks and delicacies. It boasts a warm and inviting atmosphere with its windows looking out over the harbour, so it’s sure to be an excellent location for chilling with a coffee or a pint.

There are plenty of exciting things to do and explore in and around the Isle of Whithorn. It’s a smart idea for you to research the places you want to visit and plan your itinerary. Doing so allows you to maximise your stay and see as much of the area as possible.

Of course, you can also explore caravan rentals or holiday home ownership at Burrowhead Holiday Village. As the nearest holiday park for lodge, caravan, motorhome and tent holidays, staying at Burrowhead South West Scotland might just be what you need to discover more of this coastline. Call us at 01988-500252 to arrange a tour!

What to Eat at Burrowhead Holiday Village